Taoyuan is strategically located to provide Taiwan with an excellent geographical advantage. Besides more than 800 flights a week across Taiwan Strait, Taoyuan is also the pivot in East Aisa: to the north, Taiwan connects Japan, the third largest economy in the world; to the south, ASEAN countries and India are close within its reach; to the east lies the U.S., the largest economy in the world, and to the west it shares a narrow strait with China, the second largest economy as well as the driving force behind the world's economic growth. Five major Asia cities are easily accessible from Taoyuan; including Hong Kong, Shanghai, Seoul, Tokyo, and Singapore. Average flight time to these cities is no more than 3 hours. In addition, when paired with the Port of Taipei, ships departing for Hong Kong, Manila, Shanghai, Tokyo, or Singapore—5 major gateway cities—have an average travel time of only 53 hours, making Taoyuan an option that is both fast and convenient.

Geographically speaking, Taiwan is at the center of East Asia. Global brands heading for China, Northeast Asian, or Southeast Asian markets must pass through Taiwan. Businesses that choose to operate in Taiwan can take advantage of Taiwan's investment, techonology, human resources, and management infrastructure to jointly develop important markets in China and Southeast Asia. This allows them to expand their scale of operations in the Asia-Pacific region, with Taiwan serving as their regional center. And because Taoyuan is home to Taiwan's international airport, and furthermore has abundant natural resources, it is quickly earning a nickname as Taiwan's “Global Gateway City.” 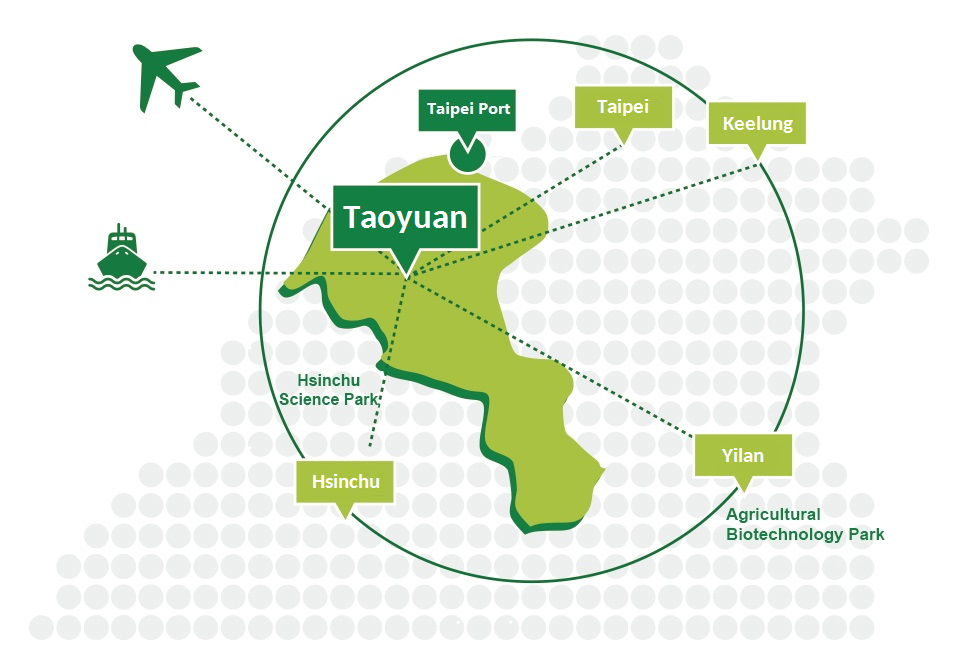