Taoyuan is the geographical, population and economic centers of northern Taiwan, with a solid economic foundation based on its successful transition from an agricultural to an industrial city. Propelled by the government's economic development projects, a total of designated 34 industrial parks have been established. Taoyuan's annual industrial output is NT$2.9 trillion, accounting for 17.4% of the nation's overall revenue, far higher than any other county or city in Taiwan. 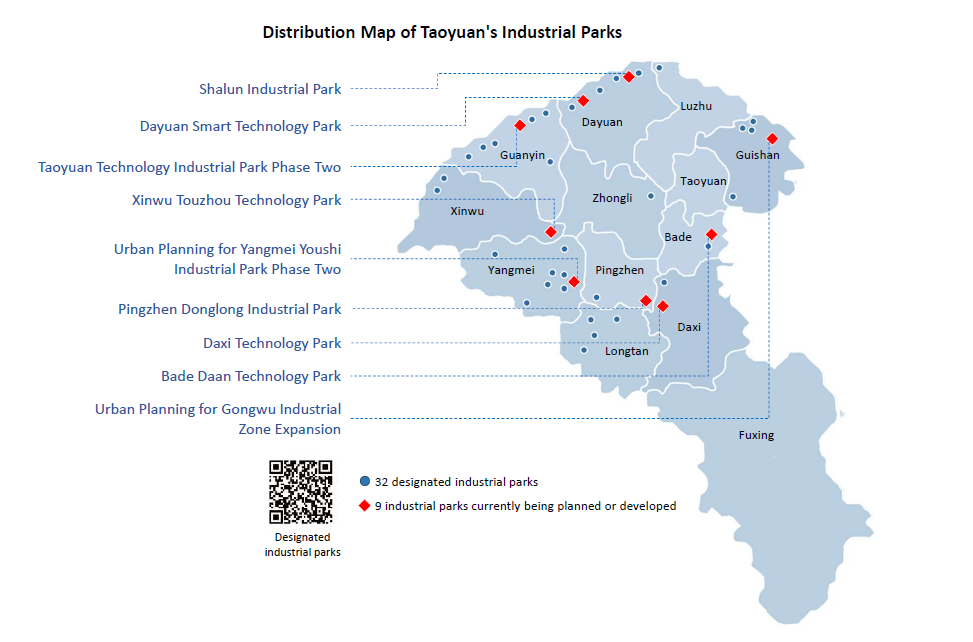 Taoyuan's Environmental Science and Technology Park is located in Tangwei, in the southern part of the Taoyuan Technology Industrial Zone, in Guanyin District. It covers 31 hectares and is the only Environmental Science and Technology Park in northern Taiwan. The park promotes sustainable urban and rural construction, building sustainable communities, green spaces, and industrial parks that exist in harmony with the natural environment. These developments combine lifestyle, manufacturing, and ecological sustainability, as well as the "4R’s" - Reduce, Reuse, Renew, Recycle. In addition, the park aims to achieve a balance between urban and rural economies and sustainable ecological development, creating a living environment where industrial development and ecological conservation can coexist and enjoy mutual benefits.

In 2013, the development plan (including a detailed plan) was revised according to the review comments by the task force of the Regional Plan Committee, Ministry of the Interior. Two additional hearings were held before a revised report on the public interest and necessity of land expropriation was completed. It was first submitted to the Ministry for review, and then a development plan was submitted. In 2014, 16 private individuals with ownership rights were surveyed on the purchase price.

In order to build on the 5 advantages of Taoyuan Science and Technology Industrial Park's first phase of development, Taoyuan city government is promoting a second phase of development. In 2013, development plans were revised in accordance with inspection and suggestions by the task force under the Ministry of Interior's Regional Planning Committee. After an additional two rounds of public hearings, an amended plan, which looked into the necessity and public interest of land appropriation, was submitted to the Ministry of Interior for review. Permission was obtained from the Ministry of the Interior and the Ministry of Economic Affairs to begin development and on-site construction for the industrial park. In 2014, after inviting bids for a third party to verify the purchase price by investigating current market price estimates, a winning bid was accepted.
Update：111-08-05
Visitor：4473 人
gotop